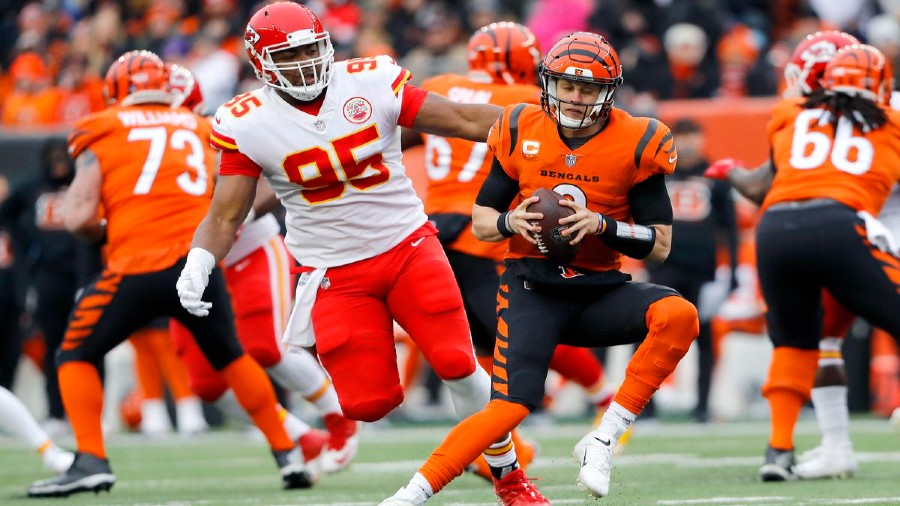 It’s slowly getting to the nitty gritty part of the season, there are still playoff places up for grabs and still hearts yet to be broken. But with 2 game weeks remaining in the season, there isn’t a lot of time left to claim one of the remaining postseason positions. With 4 still available in the AFC and 3 still available in the NFC. A few weeks ago Bengals Predictions was looking like the Bengals were going to have a hard time making a push, with the Ravens looking guaranteed to clinch the division, but a 7 game win streak has launched the Bengals into clinching a minimum of the Wildcard game, with more still to play for.

Today we’ll be looking at this Bengals team and what to expect from the next 2 game weeks. In game week 17 the Bengals host the Buffalo Bills who are, to this day, still the favorites to win the Super Bowl and in the final game week of the season they host the Baltimore Ravens in a game that could be set to decide who wins the AFC North division.

First we’ll start off with some injury news. For the game against the Patriots, the Bengals downgraded tight end Hayden Hurst to being out for game week 16 due to the calf injury he has been dealing with, it remains to be seen whether he will be available to play against the Bills in gameweek 17. With Hurst out, Mitchell Wilcox will likely end up being the top tight end in his stead. Another thing to note is that with Jalen Davis & Mike Hilton out, Allan George got his first game day call up in gameweek 15, he was called up from the practice squad for game week 16 also. While he was dropped back to the practice squad after the game against the Pats. There is a chance we could see him again, depending on recoveries for Davis and Hilton.

For the Bengals Predictions, their next opponents are the Buffalo Bills, the long-time favorites to lift the Vince Lombardi trophy this season, but with both of these teams coming into this game in fine form, who realistically takes it? While most people are putting the Bills ahead for obvious reasons, there is a potential stumbling block here for them and that is the fact that, while they have both already claimed a wild card place, the Bengals have the Ravens breathing down their neck in their division and this could cause issues for the Bills where there otherwise wouldn’t have been. It’ll be a much tighter game than I believe many people will be expecting!

With that being said, it’s now time to check out some of the upcoming fixtures that could affect the outcome of the Bengals season. Starting with the Bengals next game at home to the Buffalo Bills, this one will be a tough one for the Bengals and the odds reflect that. The Bills are favorites to take the win in this one. You can get the Bills at -125 which would return $9 from a $5 stake, and the Bengals are +105 underdogs which would see a return of $10.25 from $5.

While the season is on its last legs, online sportsbooks like BetMGM Ohio will soon become available for the playoffs because of legalized sports betting in Ohio. However, we’re unsure how the playoffs are going to unfold yet and one game that could seriously impact how things fall for the Bengals Predictions specifically is the Ravens game against the Steelers. With home-field advantage and the playoffs still within reach, it’s no surprise the Ravens find themselves -270 favorites, returning $6.85 from $5. The Steelers on the other hand are +220 underdogs returning $16 from $5.

So Bengals fans, how are we feeling about this season now? If I remember rightly I wrote a piece about the Bengals and their playoff chances a couple months back and things were looking a little bit iffy for the boys, but right now they seem to be flying high and if they can take this momentum into the postseason, then there is no real reason why they couldn’t make it deep into the playoffs, or even the Super Bowl really.

On their day they truly can beat any team in the league, you just need things to click and it’s golden. As for the rest of you, how happy have you been with your team this season? Are they already in a playoff place? Have they already been eliminated? Let us know, it’s always good to get a discussion going. For those of you who are fans of teams already eliminated, what do you think they needed to change to make a big difference this season? What would you do differently that you think would put them in with a shout of a playoff position? Either way, even if your team has been eliminated, you can enjoy the rest of the season and the postseason as a neutral and just take in all of the football.