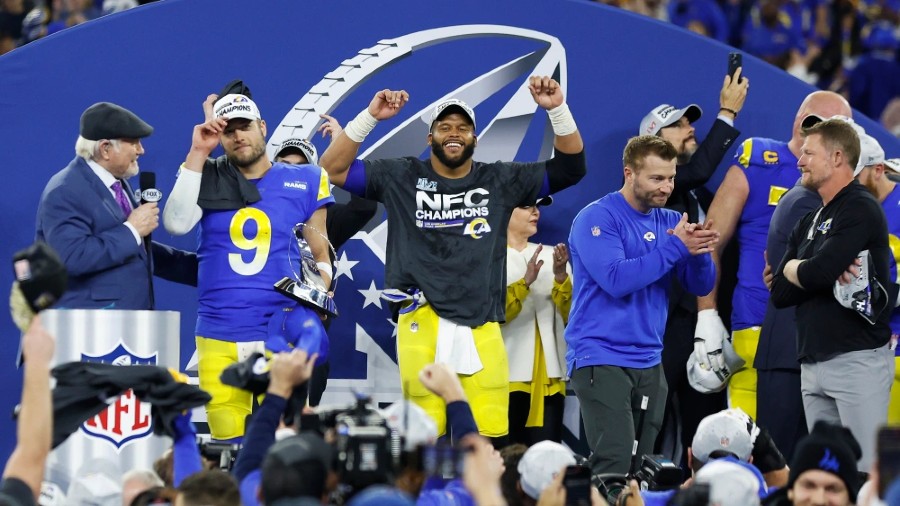 The National Football Conference (NFC) is one of the most competitive divisions in the NFL. Every year, teams battle it out for the coveted NFC Championship and a chance to represent their conference in the Super Bowl. This season is no different, and with the campaign approaching its climax, the playoff picture is starting to take shape.

So, who will take the NFC Championship this season? It’s hard to say for sure, but one thing that is certain is that it won’t be the reigning champions. Last season, the Los Angeles Rams swept all before them – including the reigning Lombardi Trophy holders, Tom Brady’s Tampa Bay Buccanneers – en route to a first conference crown in three years.

The defense of their crown couldn’t have gone any worse, however. They currently sit rock bottom of the NFC West with just four wins to their name all season. Unfortunately, the defense of their status as Super Bowl champions – an honor that they claimed in such dramatic circumstances back in February – has ended with a whimper.

Online bookmakers have made the Philadelphia Eagles the favorites for the conference championship, as you can check here: https://www.bovada.lv/sports/football. So far this season, the Pennsylvania-based outfit has lost just once all term and has picked up some notable scalps along the way. Impressive victories against the likes of the Minnesota Vikings, Dallas Cowboys, and New York Giants have seen the Eagles rise to the top spot in the NFC East, and – barring a late-season collapse – look a shoo-in to be the top seeds as the postseason gets underway.

Another side that is a contender is the 2019 NFC Champions, the San Francisco 49ers. The 49ers have been one of the most consistent teams in the NFC over the past few seasons, and they are looking to make it back to the Super Bowl this year. They have a strong roster, led by quarterback Jimmy Garoppolo, and only three teams in the entire conference have more wins to their name than the Levi’s Stadium franchise.

All three of these teams have the talent to make a run at the NFC Championship this season. However, it’s the Eagles who remain the favorites. With a talented offense and defense as well as a quarterback in Jalen Hurts who is playing at an MVP level, the Lincoln Financial Field side is the team to beat in the NFC. If they can stay healthy and on this kind of form, it would take an impressive AFC champion to stop them from securing Super Bowl glory for the second time in four years.

As well as the Los Angeles Rams, there are a number of other teams that have disappointed this term. The first that springs to mind are the New Orleans Saints. The Saints have been one of the most successful teams in the NFC over the past few years and, led by quarterback Drew Brees, reached the postseason in four consecutive seasons between 2017 and 2020.

But this term has been a disaster. They – just like the reigning champion Rams – have picked up just four wins, and are planted at the foot of the NFC South.

Finally, the Green Bay Packers have been underwhelming. The Wisconsin side had reached the playoffs in 11 of the last 13 years up until this season – including going all the way in 2011, winning the Super Bowl for the first and only time in legendary quarterback Aaron Rodgers’ career. But this term, they have picked up just five wins, and it looks like that incredible postseason appearance streak may be coming to an end.

Lombardi Trophy looks set to head to the AFC

Whoever wins the NFC Championship this season will have their work cut out for them in Glendale, Arizona at Super Bowl LVII, whether it’s the Eagles, Cowboys, or 49ers. The reason we say that is because – despite the Eagles losing just once – the two most impressive teams this season both ply their trade in the AFC. Both the Buffalo Bills and Patrick Mahomes’ Kansas City Chiefs remain the teams to beat in the postseason. The duo look set to battle it out for the AFC Conference title and then will head to the State Farm Stadium as favorites for the crown. And if that wasn’t enough, there’s also Tua Tagovailoa’s resurgent Miami Dolphins to contend with. One thing that is certain however, is that the climax to the 2022 NFL season will be as unpredictable as it has been gripping.