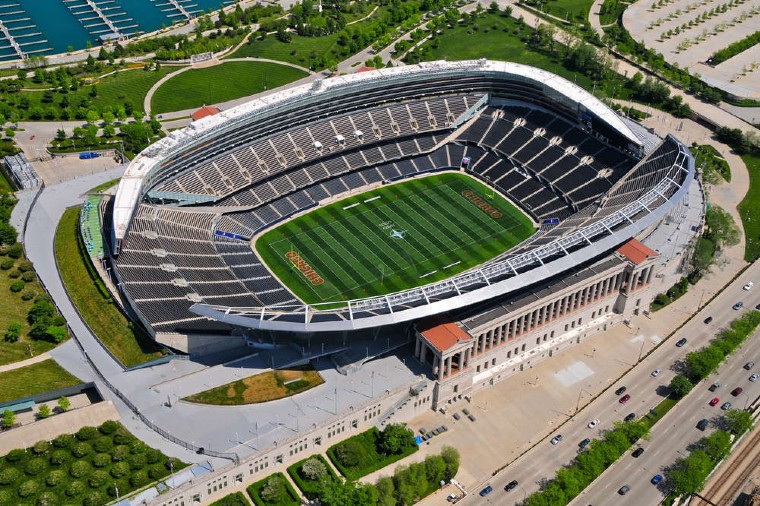 The NFL is a multi-million dollar industry and has grown in popularity over the years. With 30 full-time NFL stadiums, some teams share stadiums, so it’s definitely worth investing in a great venue for NFL players to call their home base. Varying in capacity and design, here are our top 8 NFL stadiums to watch the NFL games at. There’s bound to be one near you worth a visit. From the atmosphere to the playing surface, we’ve got you covered. Check out more details on the NFL wager line.

Don’t be put off by some of the NFL stadiums names, as most venues are cashing in on sponsorship deals and have sold their names to brands. This is a financial gain in the long run because the venues will become more well-known thanks to the media and are bound to draw in the crowds next season.

First off is the home of the iconic Green Bay Packers. Located in Green Bay, Wisconsin, Lambeau Field is a great stadium for a rich atmosphere that is nothing but supportive of the famous team. Lambeau Field is known for being small but mighty, and locals are known for creating a hospitable environment and encouraging heavy involvement in the game. The stadium was built in 1957, and sometimes traditional is better because it remains a solid venue holding 81,441 adoring fans.

Located in Inglewood, California, the SoFi stadium is the shared home of the Rams and the Chargers. So it’s no wonder that the 2020 million-dollar investment took a lot of work, because of the joint support and seeing double the camaraderie, SoFi sets the teams’ home turf apart from others. The capacity is a respectable 70,000 and is sure to be a hub of activity once the new season commences. This venue is set to host the Superbowl in February 2022 and WrestleMania 39 in April 2023. It will also host the opening and closing ceremonies of the 2028 Summer Olympics.

Paradise, Nevada, holds the newest home of the Raiders. A modern, space-age look creates an impressive construction that holds 65,000 fans at capacity. The grass surface offers training grounds as well as a home for bigger league games and has already seen gains from the Raiders since its 2020 construction.

The US Bank Stadium is the home of the Vikings and can be found in Minneapolis, Minnesota. Although it isn’t the most modern venue as it was built in 2016, the synthetic turf is a year-round terrain for training and games alike. This stadium has a slightly smaller capacity of 65,655, but that didn’t stop it from sparkling during Super Bowl 52.

Benefitting from the deal with AT&T is the home of the Dallas Cowboys, which is known for being extra-large like all things tend to be in Texas. If you’re looking for a “modernly majestic” stadium, head to Arlington, Texas to see for yourself. Formerly known by the Cowboy’s Stadium and nicknamed Jerry World after the Cowboys owner Jerry Jones, the 2009 venue holds 80,000 fans at capacity and has taken the NFL by storm. The stadium can actually be reconfigured to hole 100,000 seats. Texans aren’t ones to do anything by halves, and the venue has already set records for the largest NFL audience in 2009.

The bermuda grass of the Arrowhead Stadium is the home of the Chiefs. Kansas City, Missouri, provides a good mix of what Green Bay and Seattle have to offer. The stadium was built in 1972 and is still going strong today, holding 76,416 fans at capacity. It is part of the Truman sports complex and is the 27th largest stadium in the United States, and the sixth-largest in the NFL.

Living up to the name, the home of the Falcons is the new version of the Georgia Dome, with a capacity of 71,000. This relatively new stadium can be found in Atlanta, Georgia, and was constructed in 2017 so still has a lot of triumphs to see in the future. The $1.6 billion building is monumental in the NFL and the Falcons’ career.

In Pittsburgh, Pennsylvania, you can find the home of the Steelers. The Kentucky bluegrass offers an open setting, great for a more involved viewer experience. This older venue was constructed in 2001 and has a capacity of 67,400 during peak season. Heinz Field made its TV debut as a supporting actor in The Dark Knight Rises movie, so be sure to look out for it. This venue is also home to the Pittsburgh Panthers college football team and is named after the local Heinz company, which purchased the rights in 2001. It has also been known to host hockey games, which has been huge in the growth of tourism in the Pittsburgh area.

It’s important that the NFL teams have somewhere to base their home games and are more comfortable playing in. It is also beneficial to train in the place where they are set to be playing, so they feel more at home and relaxed. People tend to act differently when you visit them at home compared with when they’re out, and the same applied to NFL players. History dictates that when players are on their home ground and playing in their team’s stadium, they feel less stressed and more confident when playing.

The National Football League has long been a part of American culture and is not showing any sign of slowing down. A true display of human strength, athleticism, and discipline should be celebrated. The sport is some people’s religion, and the NFL stadiums are their places of worship. The role of a decent stadium with large capacities and modern architecture is just as important to some as is the beauty of a church or mosque’s exterior features as well as interior. Be sure to look up which stadium is local to you and pay it a visit.